The question often arises on how to independently stream the image from cameras with two images particularly in the case when the image sensors may have completely different views such as with the S16 and S74 or flex mount cameras. In certain cases, this is possible with some limitations.

This is possible with the S74 or M73 cameras but currently (firmware 7.3.1.46) only in the case when the camera has two 4K (8MP) optical image sensors installed. This will not work if a Thermal Sensor, 12 MP, or 4 MP sensor is installed in the camera.

This is configured in Admin Menu > Camera Administration > Integration Protocols

The RTP integration must first be enabled. After setting and storing you can then set the Stream Source to Raw. The Raw stream source reduces image processing to a minimum in favor of higher frame rates. This means that the camera can generate up to 30 frames/s in UltraHD. 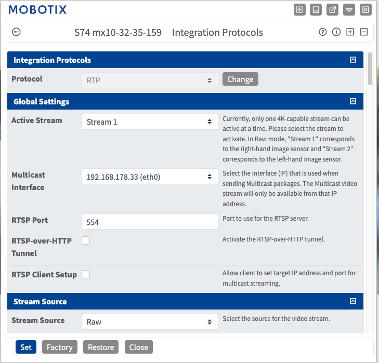 The resolution for each stream is set in the stream settings further down the page.

The URL for this stream will be either of the following depending on which stream is active.

The second stream will be selected from Stream 3 and 4. These streams are limited to Full HD when the camera is in Raw mode.

Those URLs for the second stream are:

ONVIF – It is also possible to separate the streams when you have activated the ONVIF integration protocol. The Stream Source must also be set to RAW and the camera restarted then the following URLs can be used for the independent ONVIF streams:

With cameras such as the S16 the only possibility to get separate streams is using the event stream URL in preview mode which is limited to VGA resolution. This is also only possible with a Motion JPeg stream.

Further Information on streaming with Mobotix cameras can be found in this article:

When integrating Mobotix Cameras with 3rd party Video Management Systems, NVR, DVRs and other Data Appliances it is often necessary to know the correct URL to request the RTSP stream. When using ONVIF integration this will often not be needed as the cameras will automatically be discovered but this is not always the case. This article demonstrate the RTSP URLs for all the various series of Mobotix cameras. Mx7 Cameras. [image] Mx7 cameras with recent firmware are ONVIF S and T compatible…